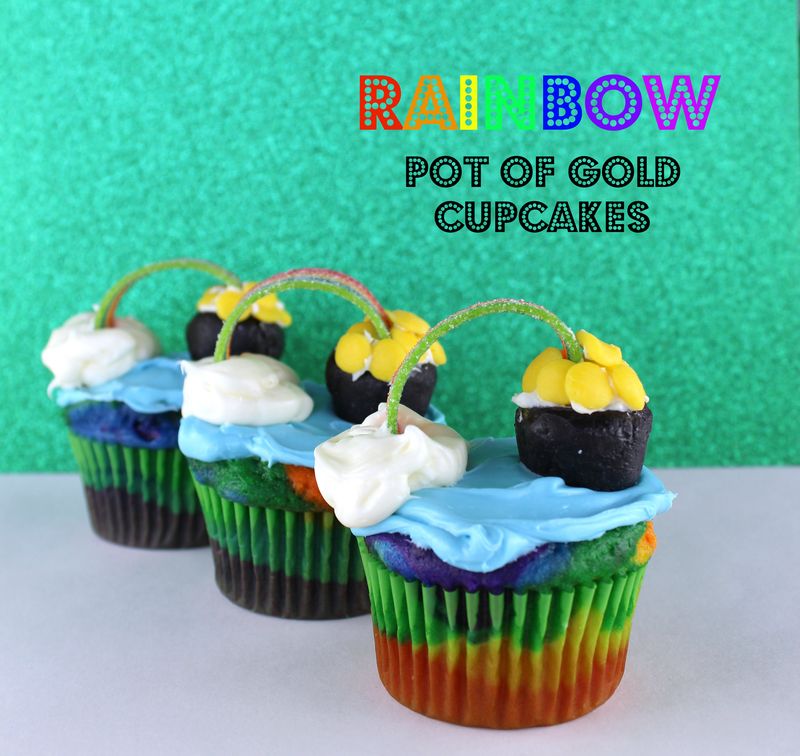 My girls love St. Patrick's Day because they love rainbows, so there's no way I could pass up on making these rainbow cupcakes topped with a pot of gold at the end of a candy rainbow.

It's a rainbow on top of the cupcake plus the cupcake itself is rainbow-colored. I don't know how much more rainbow I could have packed into this little treat. 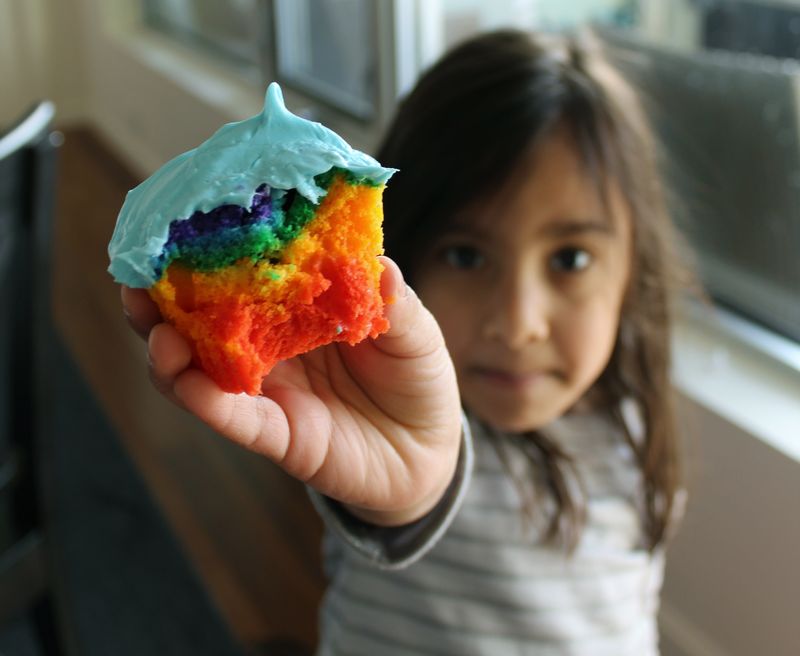 The pot of gold and the gold coins are made out of candy clay, which is just like modeling chocolate, but it's made out of Candy Melts rather than chocolate. It was my first time making and using candy clay, and I learned a lot from my first experience. Basically, I wish I'd seen this post before making it. Regardless of my cluelessness, I think it still turned out okay for a fist time. I'll definitely use it again for decorations, and hopefully it'll be a little closer to perfect next time! 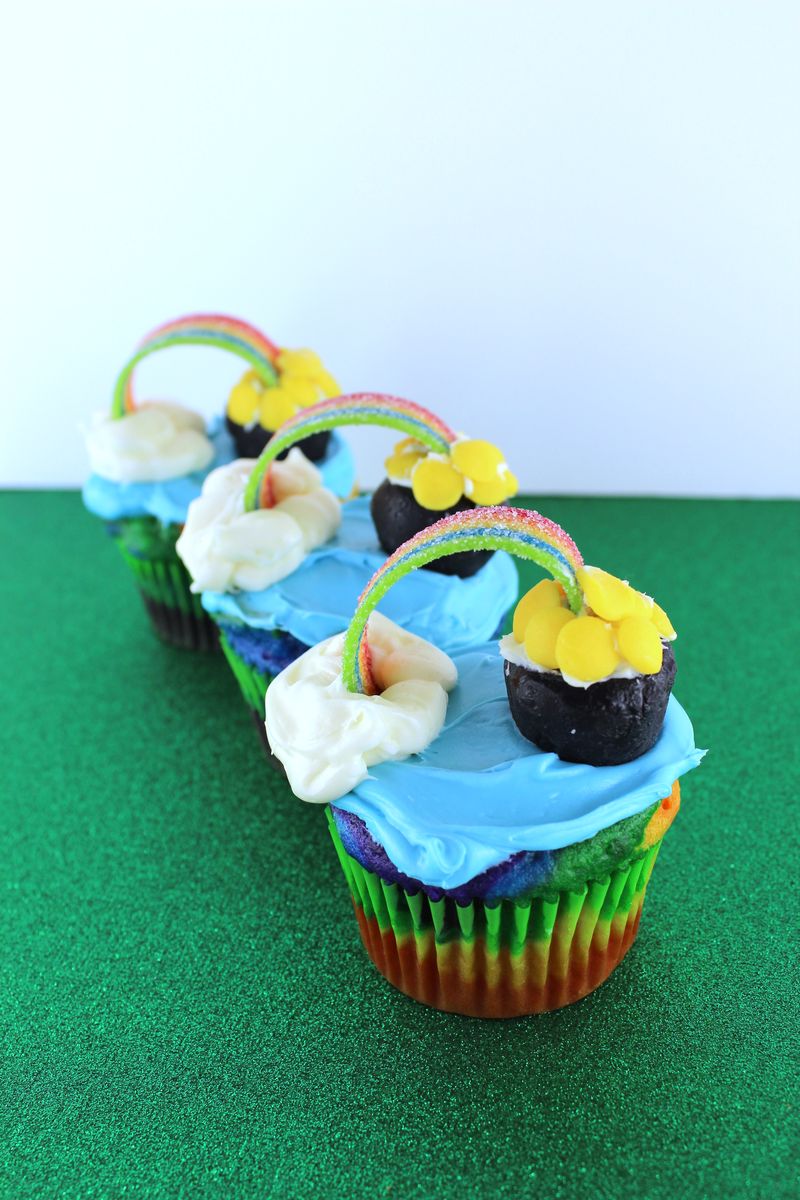 These cupcakes are an excellent project to do with a little one interested in baking or helping in the kitchen. I made the cupcake batter and divided it into 6 equal parts. My five year-old daughter colored each bowl of batter with each of the colors of the rainbow. Then she took a tablespoon of each color and placed it in each cupcake liner. 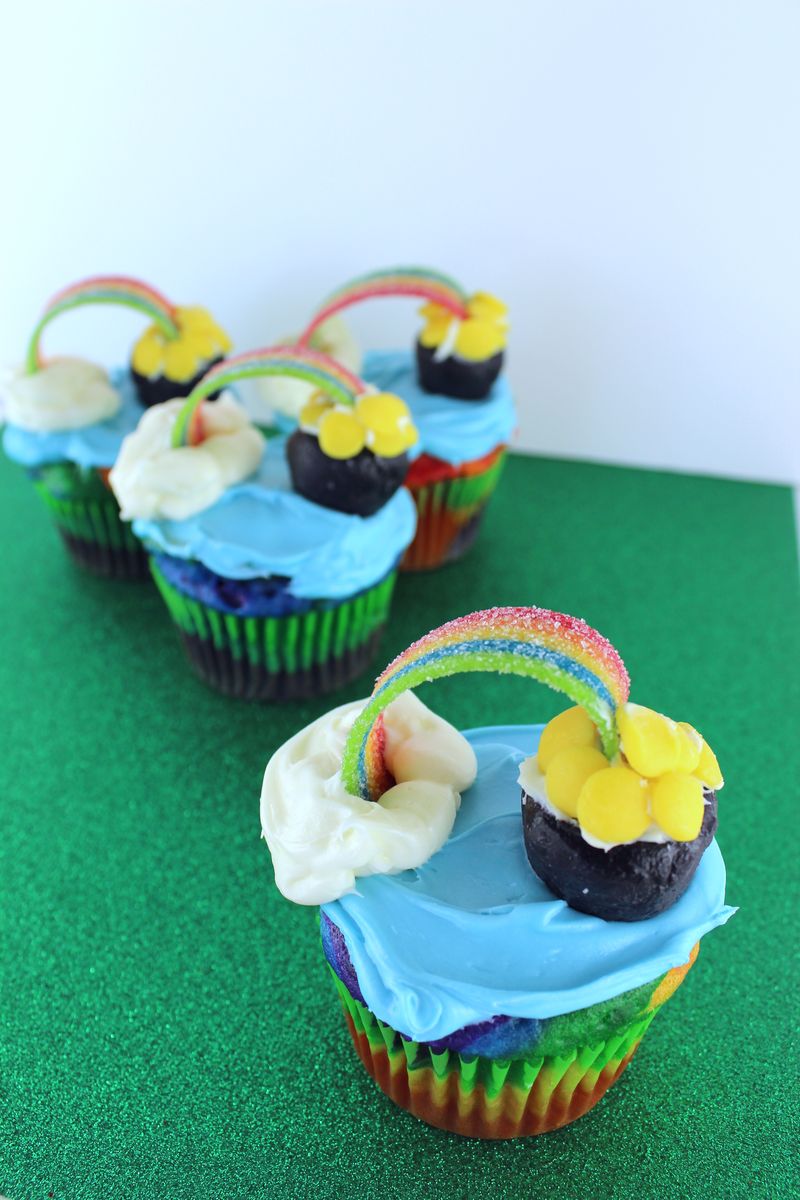 For the decorating, she helped tint the vanilla frosting light blue. She also helped roll out the dozens of gold coins out of yellow candy clay. She ended up doing quite a bit of addition, skip counting, and subtraction to determine the exact number of coins we needed to make. (It turned out that we needed 72 gold coins). She thinks the cupcakes ended up looking pretty fantastic, and I'd have to agree! 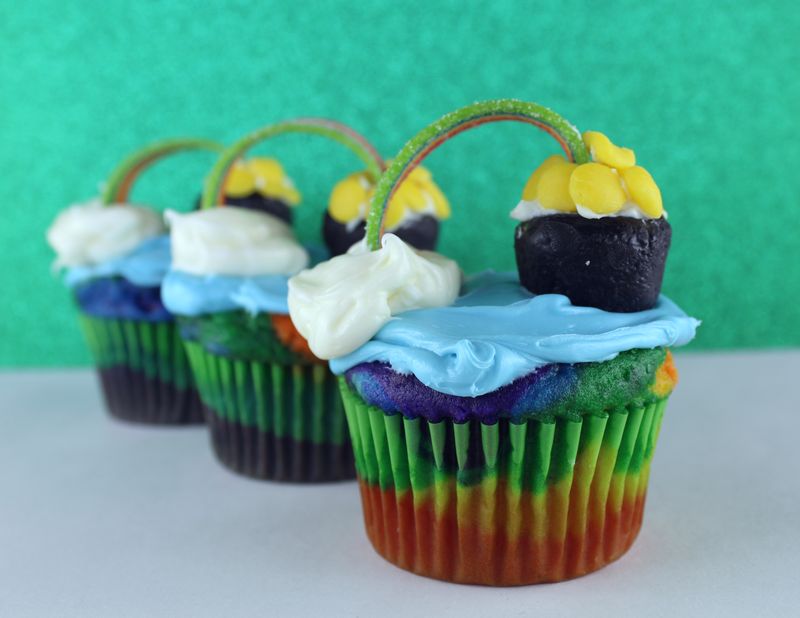 Instructions for the cupcakes

Prepare the cupcake batter according to your recipe.

Divide the cupcake batter equally into six different bowls. To ensure each bowl had an equal amount of batter, I weighed the batter and divided it equally between the bowls. Dye each bowl one color of the rainbow.

Using a tablespoon, place one tablespoon of each color into each cupcake liner. Fill the liners 2/3 full and bake according to your recipes instructions. Cool the cupcakes completely before decorating.

Ingredients for the Candy Clay

1 12 oz. package of Candy Melts in black and in yellow

Melt the Candy Melts according to the package directions. Once the Candy Melts are completely melted, slowly and carefully fold the corn syrup into the Candy Melts. Make sure not to mix too quickly or the oil will separate from the candy, making it extremely oily. Mix thoroughly until the syrup is completely incorporated.

Place the mixture on a piece of parchment, and allow it to cool for 3 to 4 hours at room temperature. Once firm, place in a zip-top plastic bag, and store until ready to use.

Knead the black candy clay until it's smooth and pliable. Form into a walnut-sized ball. Flatten the tops of each ball. Set aside to harden.

Knead the yellow candy clay until smooth and pliable. Form tiny balls and flatten to a disk. These will form the gold coins. Make as many as you think necessary, and set aside to harden.

Tint some of the vanilla frosting light blue. Spread frosting on the top of each cupcake.

Place a bit of vanilla frosting in a plastic bag. Snip the end off of the bag, and pipe clouds around the rainbow candy.