I grew up eating a ton of lentils – yellow, green, brown, split, whole. You name the lentil, and it made it to the dinner table in one form or another, either in a soup, mixed into a meat stew, or even fried into light, crisp dumplings. In South Asia, lentils are a staple, and I even as a child, I’ve always LOVED them. They’re hearty, healhty, and they can take on a multitude of flavors and textures. Today I’m sharing a lentil recipe that is not from South Asia, but rather the Middle East (particularly Syria, Jordan, and Palestine). It’s Lentils with Pomegranate Molasses, Sauteed Onions, and Pita Chips. 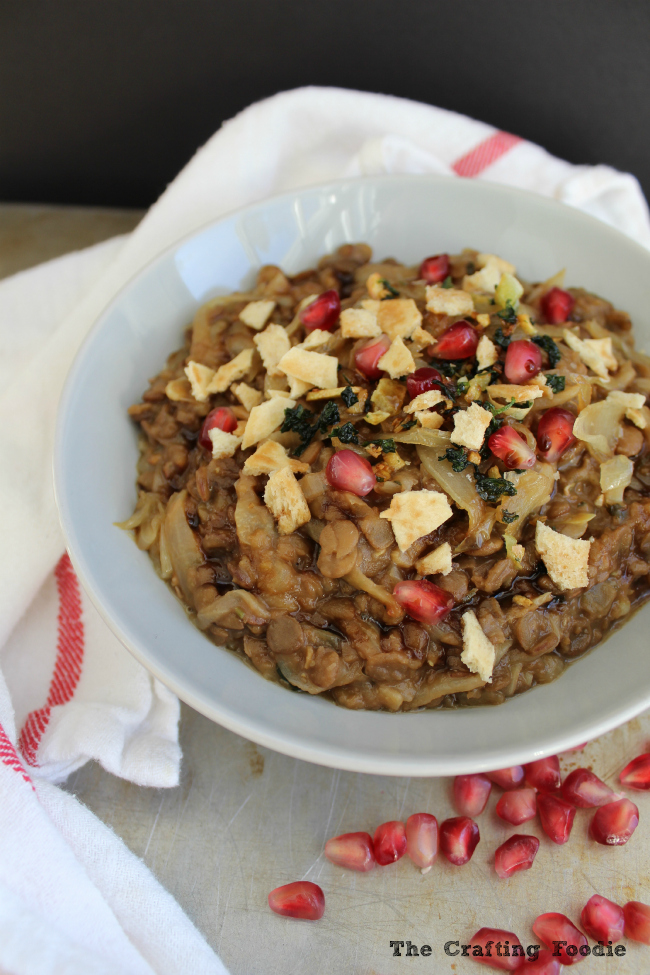 If you’ve never had pomegranate molasses, then you’re in for a treat. It’s sweet and tart at the same time, and it’s not too assertive while still imparting a savory/sweet flavor to the lentils. I buy a huge container of pure pomegranate juice from Costco and make my own pomegranate molasses, but you can easily buy a good quality one (one without preservatives or added sugar). It’s available in Middle Easter grocery stores and Whole Foods.

While I loved lentils growing up, I’m not sure my husband could say the same thing. He loves meat. And sometimes he feels like lentils, beans, and vegetables, in general, just take up space when he could be eating meat. That is until he started eating Lentils with Pomegranate Molasses, Sauteed Onions, and Pita Chips. He loves the crunch of the pita chips, the slight sweetness from the onions, and the tangy pomegranate molasses.

Traditionally this dish includes some wide-noodles actually mixed into the lentils. My husband and I prefer it without the noodles, making it less traditional. My husband also loves sprinkling some fresh pomegranate seeds on top of his lentils, which is anything but traditional. Another departure from the authentic lentil dish from the Middle East are the pita chips. Usually people fry pita and sprinkle the chips on top (which, by the way is, so delicious!), but since I wanted a healthier option, we eat it with crushed, baked, pita chips straight from the bag.

If you’re not a fan of lentils or you’ve never tried them, I hope you give this recipe  a try. It tastes delicious to even the most skeptical non-lentil eaters 🙂 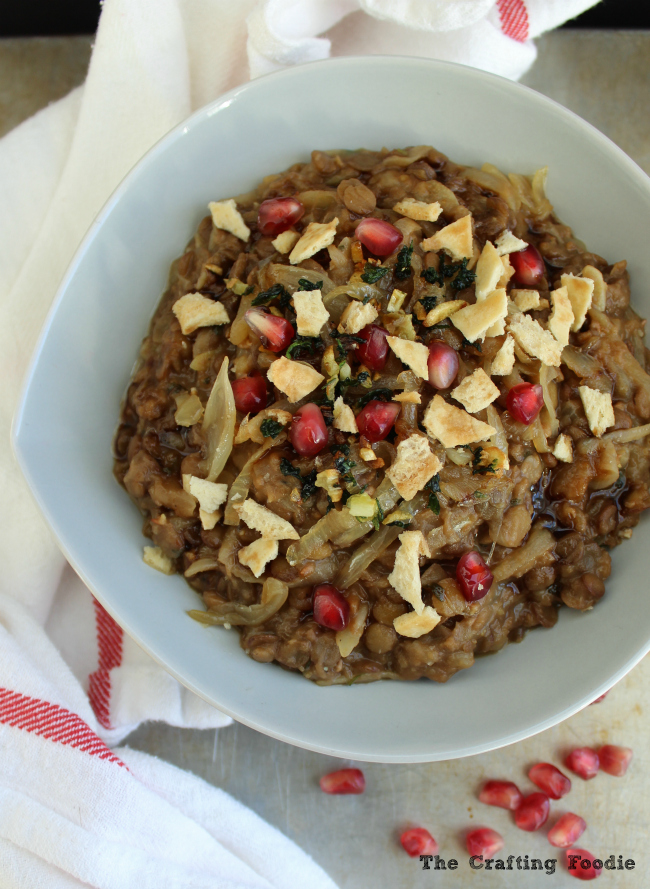 Leave a Reply to Allie | Baking a Moment Cancel reply